The potatoes, donated by Northland Potato Growers Association members through a project dubbed Northland Potato Blessing Project, will be used for meals, holiday gift baskets and food boxes during the next year.

The potatoes, donated by Northland Potato Growers Association members through a project dubbed Northland Potato Blessing Project, will be used for holiday gift baskets and for meals and food boxes during the next year.

On a mid-November day, residents of the emergency shelter quickly answered a call over the mission loudspeaker to help unload 50-pound bags of red potatoes, which had been bagged at NoKota Packers Inc, in Buxton, North Dakota, and were in a vehicle parked outside.

Volunteers hoisted the sacks over their shoulders and carried them into the mission. Once inside, the volunteers loaded the potatoes onto a metal food cart, which Shauna Lorenzen, Northlands Rescue Mission kitchen manager, wheeled into the kitchen. 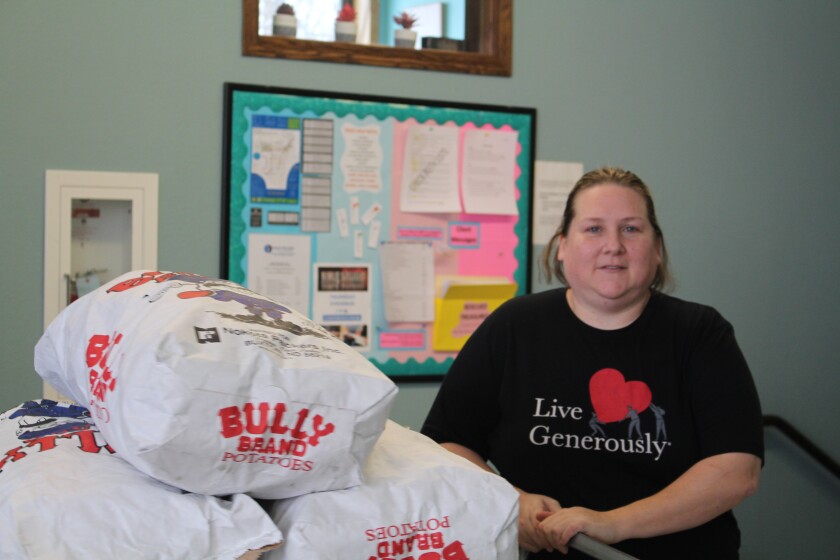 “This is a very welcome donation,” Lorenzen said. “We get so excited because along with inflation, our donations have been down.”

When the Grand Forks Herald highlighted that donations to Northlands Rescue Mission had decreased while the number of meals the emergency shelter serves had increased, it prompted the Northland Potato Growers Association to launch the Northland Potato Blessing Project, said Jacy Kuersteiner, association office manager and project organizer.

The association, based in East Grand Forks, Minnesota, asked its members for volunteers to donate potatoes. Several responded. During the next year, farmers will donate 4,100 pounds of red potatoes and 6,480 bags of potato chips to Northlands Rescue Mission.

The shelter will use the chips for the sack lunches it makes for residents and for others who stop in at the shelter in need of a meal.

The donations are being made as a way to show appreciation for the support of the local potato industry, said Donovan Johnson, Northland Potato Growers Association president.

“We recognize it takes many people to create a potato crop … the growers, the community, the workers,” Johnson said. “We’re thankful and giving back.”

The cooks at Northlands Rescue Mission can make stuffed baked potatoes, mashed potatoes and hotdish with the donated produce, Lorenzen said. Meanwhile, potatoes are shelf friendly so they can be stored for later use.

However, with donations sparse this year, there likely won’t be a lot to store. Northlands Rescue Mission used the 300 pounds of potatoes the Northland Blessing Project donated in October in a week and a half, Lorenzen said.

Northlands Rescue Mission makes a total of 225 meals daily at the beginning of the month, and the number typically grows to nearly 300 by the end of the month, she said.

NoKota Packers Inc., in Buxton, North Dakota, which washes and packs potatoes for about 10 farmers, was glad to be able to answer the Northland Potato Association’s call for volunteers to donate the potatoes to Northlands Rescue Mission, said Carissa Olsen, NoKota Packers president and CEO. The company annually donates to food banks outside of Grand Forks and was happy to be able to give several hundred pounds to the shelter in the city just down the road from Buxton.

“We jumped right in, knowing it would be local,” Olsen said.

The company donated in October and also will donate again in December.

NoKota Packers’ mid-November potato donation was on the evening meal menu, minutes after the produce was delivered.

“I’m going to be able to make some of these for supper tonight,” Lorenzen said, with a smile, as she looked at the bags of donated potatoes.